A Hemp Revival Spreads Across Wisconsin

The article originally appeared in the Wisconsin State Journal and Madison.com on June 30, 2019. By Barry Adams.

LONE ROCK — At their annual meeting in February 2018 to discuss the next planting season, a group of farmers expressed mixed reactions to Sam Liegel’s advice on how to supplement their plummeting income.

“Some of them looked at me like I was smoking the product, as they would say, and then there were progressive farmers who would really grow any crop to make a dollar,” Sam Liegel said. “And this crop has plenty of margin so it piqued their interest.”

Liegel and his family, who sell seeds for corn, soybeans, alfalfa and other traditional crops, bring in farmers each year to talk about the previous year’s crops, look ahead to the next planting season and discuss topics such as hybrids, weeds and pest management.

The land is fertile here where the Wisconsin River dissects the undulating terrain but farmers are not immune to the devastatingly low corn, soybean and milk prices that resulted in the closure of 691 dairy farms across the state in 2018. An additional 212 closed in the first three months of this year, according to the U.S. Department of Agriculture, and hundreds more will likely shutter before the year ends.

So when Sam Liegel, 31, brought up the idea of planting hemp, some farmers, 40 years older than Liegel, shook their heads and had no interest. Others, maybe out of desperation, frustration or who knew something about the economics and uses of the plant, were more open.

Interest in hemp farming has blossomed into a full-blown business plan by the Liegels, other family members, close friends and 106 investors who have ponied up $2.5 million to create Driftless Extracts. It includes a greenhouse for starting hemp plants, as well as a massive hemp drying machine that was ordered from the Czech Republic and is scheduled to arrive in August. Processing equipment to extract cannabidiol, or CBD, is set to arrive in November.

And it’s all going into the seed warehouse that will also serve as a storage facility for the 100 acres of eight varieties of hemp planted for the first time this year by the Liegels. Driftless Extracts was also created to process hemp grown by other farmers who want to diversify their crop rotations and increase their farm incomes, a service that will begin this fall. For 2020, the Liegels plan to have the ability to process up to 2.5 million pounds of hemp grown on their own land and hemp grown by other farmers on contract who need their product readied for market.

“I’m one of those guys that doesn’t like the oceans being full of plastic,” said Ed Liegel Sr., 68, who has farmed his whole life near Plain and is the former director of the state soil testing laboratory. “If we can bring hemp back into importance in agriculture and boost up the local agriculture community a bit, that would be a win for everybody, wouldn’t it? Hemp is kind of a big deal.”

Hemp and marijuana are both forms of cannabis, but hemp lacks enough of the active ingredient THC to get people high. Hemp is bred to contain less than 0.3% of THC, while marijuana averages about 12% THC. Any hemp crop that is above the 0.3% threshold for THC must be destroyed.

Hemp is widely being used for CBD oil, which is used to treat childhood epilepsy syndromes that typically don’t respond to anti-seizure medications, according to Harvard University.

CBD also is commonly used to address anxiety, and for patients who suffer insomnia or have chronic pain. Side effects of CBD use, according to Harvard’s Dr. Peter Grinspoon, include nausea, fatigue and irritability.

Scores of shops selling CBD oil and CBD-infused products have popped up across Wisconsin, including in some of the smallest towns, while convenience stores including Kwik Trip are now actively promoting CBD products such as topical rubs, oral pouches and tinctures and drops. Some ingest the CBD oil straight while others mix it with food or nutritional supplements. Food, drink and cosmetic manufacturers are also adding CBD to their products.

However, most of the CBD sold in the state comes from hemp grown in Oregon, Kentucky and Colorado, leaving the CBD supply market wide open for Wisconsin farmers. The Liegels believe they can get 1,000 pounds of usable biomass material per acre which would result in about 60 to 80 pounds of dried CBD that they would sell to manufacturers.

But the primary draw for Wisconsin farmers is economic yields that dwarf that of corn and soybeans.

Revenues from an acre of corn or soybeans can range between $500 and $800. But an acre of hemp creates gross yields that can range from $15,000 to more than $30,000. The input, harvest and processing costs per plant may range from $10 to $30 but can still produce profits that may be 10 to 20 times that of traditional crops, said Phillip Scott, who in early 2018 founded the Wisconsin Hemp Farmers & Manufacturers Association.

In 2018, the first year hemp could legally be grown again in Wisconsin, 247 licenses were issued to growers and 100 licenses to processors, according to the state Department of Agriculture, Trade & Consumer Protection.

“Wisconsin has a chance with its land mass and its farmers to be one of the industry leaders,” said Scott, who lives in Madison and is growing 182 acres of hemp on plots throughout the state. “Wisconsin was a leader at one point so why not bring that heritage back?”

Large-scale hemp production in Wisconsin began in 1908 and by 1918 accounted for 7,000 of the 42,000 acres grown in the U.S., according to a report from UW-Madison. Rope was a leading product then but hemp was also used to make clothing and shoes for those serving in the military. The Waupun area was a hub for hemp production but the crop was also grown in Dane, Fond du Lac, Green Lake and Racine counties, among others.

And, just like today, the then-fledgling industry had to overcome a lack of infrastructure needed to plant, harvest and process hemp. By 1918, hand labor was no longer needed as machinery was introduced. The state also had 70% of the hemp mills in the country at that time. However, the hemp industry died out after World War II and production was later banned.

That is no longer the case, which is opening the door for entrepreneurial and enterprising farmers.

But it’s not all about CBD oil.

The Liegels are also growing hemp for fiber that can be used in a wide range of products including shoes, clothing, insulation and, when mixed with other materials, panels and parts for the automotive, aerospace and military manufacturing industries. Their plan is to harvest about 8 tons of fiber biomass per acre.

“We don’t know what all of the uses are,” said Simon Liegel, 35, one of Ed Liegel’s sons, who has a background in finance and is one of the founders of Driftless Extracts. “The (tension) strength is really, really strong in hemp because of the length of the fiber. And if you can (process) it in an efficient manner and create a good raw material, there’s lots of uses for it.”

The planting at Driftless began in April with 200,000 seeds that cost about $1 each being started in a 6,300-square-foot greenhouse. Once they reached about 4 to 8 inches tall, they were planted in May by crews using a mechanical planter that was hand-fed plants by laborers. Some varieties used for CBD were planted 4 feet apart and will resemble more of a bush at harvest this fall. Industrial hemp was planted with seeds with a traditional planter only inches apart to encourage the plants to grow tall and lean to create the long fibers.

Ed Liegel Jr., 36, president and CEO of Driftless Extracts, said his company is hoping to work with the U.S. Forest Products Laboratory in Madison to develop composite products containing a mix of hemp and carbon fiber. Liegel Jr. sees hemp fiber production as a long-term effort that will make his company sustainable.

“There is this really cool opportunity right now to make some money in CBD so we want to capitalize on that and put in some long-term infrastructure that will allow us to make that money and then flip that money into the (research and development) needed to make the industrial space a reality,” Liegel Jr. said. “There are a lot of industrial applications for hemp but it’s not a fully fledged-out market.”

Driftless Extracts is the combined efforts of those with backgrounds in agronomy, finance, engineering and computer technology. The diversity of the founders was a selling point to investors along with the built-in client base that already consisted of farmers with years of trust in the Liegels because of their seed businesses and farming backgrounds. In December, Driftless hosted 80 growers interested in hemp, some of whom will likely have their products processed by the Liegels.

“Net farm income is at the lowest level since the 1980s farm crisis, and I know that because I do the math on my own books on my own farm and it’s hard to pencil out actually running the acres,” said Sam Liegel, who farms near Plain near the farm where he grew up. “The numbers are brutal but this is an agricultural revitalization using hemp as the centerpiece. Agriculture is depressed enough already and this might be a way for true conventional agriculture to find another crop to put in the rotation.” 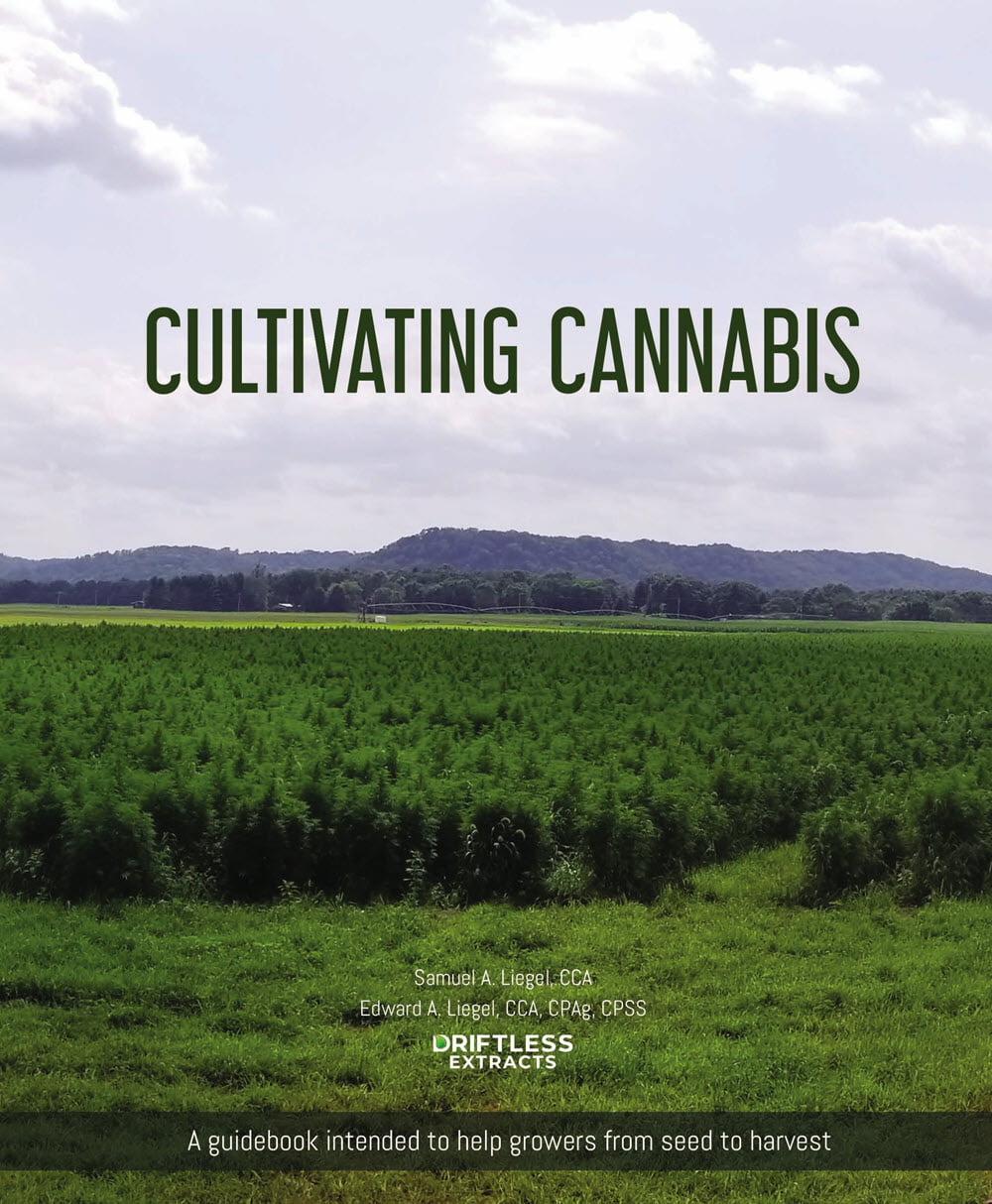